Need some Hakuna Matata in your life? Look no further than Bass Concert Hall, where Disney’s The Lion King is making a pit stop on the show’s national tour. The Tony award winning Best Musical is back in Austin with a strong cast, brilliant technical elements and a whole lot of heart.

The Lion King dazzled audiences when it was first produced on Broadway over 20 years ago, the production taking a creative approach in staging its beloved source material by utilizing elaborate puppetry and abstract animal costumes. The musical version is now as esteemed as the 1994 animated classic, and the familiar story and characters were brought to life in full color on the Bass Hall stage. 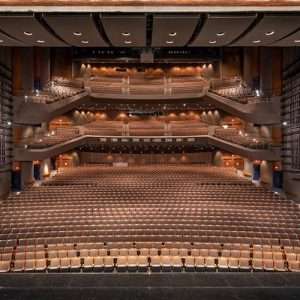 The cast, led by an energetic Darian Sanders and a precocious Jaylen Lyndon Hunter playing Simba and young Simba respectively, danced, sang and moved through the story’s lightest humor and deepest tragedies with energy and grace, expertly utilizing their puppetry throughout. Gugwana Dlamini as Rafiki displayed powerful vocals throughout the show’s powerful opening number. Gerald Ramsey gave a commanding and endearing performance as the patriarchal Mufasa, Diamond Essence White as Sarabi gracefully led an ensemble of weeping lionesses in one the show’s most empowering scenes, and Kayla Ciphers led and sang with energy as a fierce Nala. Standing out from the cast were Nick Cordileone and John E. Brady as the hilarious dynamic duo of Timon and Pumbaa.

Technically, this show is absolutely brilliant, utilizing fly systems and brilliant stage effects to paint the scene of an African prideland. The wildebeest stampede scene’s dynamic lighting and creative effects gripped the 2900 people who filled Bass Concert Hall Friday night, and the reprise of “He Lives in You” offered masterfully handled puppetry in the show’s most uplifting number.

Disney’s The Lion King is great fun that the whole family will enjoy. The production plays at Bass Concert Hall at the University of Texas through April 24. Visit texasperformingarts.org for tickets and more information.