The iconic rap artists from the 1990s-2010s took over the 2022 super bowl halftime show. The lineup was Dr. Dre, Eminem, Snoop Dogg, and Mary J Blige with special guests 50 cents, and Anderson Park. This was a big moment for hip-hop and black culture during black history month. The halftime show took place in SoFi Stadium which is the Los Angeles Rams home stadium.

The theme of the halftime show was a love letter to California more specifically Compton. The place of the show was important because Los Angeles is 20 minutes west of Compton, where Dr. Dre was a founder of N.W.A. N.M.A was a popular hip-hop group in the 90s made up with members Dr. Dre Arabian Prince, DJ Yella, Eazy-E, Ice Cube, and MC Ren They also put in important landmarks in Compton on the white building including Tam’s Burgers, Dale’s Donuts, and the nightclub Eve After Dark.

50 cent made an unexpected guest appearance. He performed his hit song In Da Club and even paid hostage to the music video of In Da Club by hanging upside down at the beginning of his performance.

The Queen of Hip-Hop Soul, Mary J Blige took the stage and performed her hit 2001 song “Family affair.” Mary J Blige was dancing like she never ages. Her performance was just so joyful and refreshing. Blige is wearing a silver dazzled bodysuit and high boots and her dancers are matching her with the same color. She pulls our heartstrings by singing No More Drama. 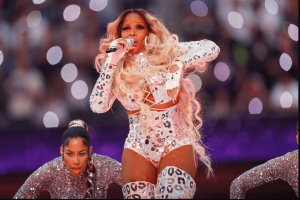 Kendrick Lamar popped up with a bunch of boxes labeled “Dre Day” and opened his performance with his song “M.A.A.d City (Man down)” and into “Alright”. Lamar’s dancer wearing black suits with a sash that says “Dre day”.

The Detroit native rapper Eminem performs “lose yourself” and the dancers are dressed in gray and black hoodies just like Eminem’s character Jimmy “B-Rabbit” Smith Jr. in the hit movie 8 miles. We also see a mimi cameo from Anderson Park on the drums. After the performance, Eminem takes a knee in protest in the NFL. 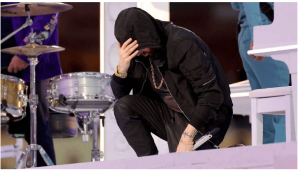 The show ends with Dr. Dre playing the song “I Ain’t Mad at Cha” by Tupac played on piano which is pushed back from racial issues in the NFL. all the performers come to get one last time.