Sandwiched in between Robert’s Carpets and Jovi’s T-Shirts & Signs in a stripmall so close to i10 that you can smell the traffic, lies one of the two Pizaro’s Pizza locations. The original Memorial location opened in 2011 and  the Montrose flagship location in 2015 (they relocated the Memorial restaurant to the stripmall off i10 in 2018). At heart, Pizaro’s is a family-run business. Founded by Bill Hutchinson, his wife Gloria, and their son Matt, Pizaro’s could possibly be the most authentic Napoletana pizza I’ve tried in Texas

The restaurant itself is inviting. A great way to wait for your pizza is to look at the decorations; homages to pizza are plastered on the walls.  The building seems steeped in history despite this location having only been open since 2018. A direct view of the kitchen provides a sort of wonderful transparency. Shortly after ordering, I can witness the creation of my pizza from the delicate tossing of the dough to the flickering heat of the oven singeing the rising bubbles of air lining the pizza’s crust. The large white pizza oven is a marvel; the only thing that can take my eyes off of it is my very own pizza once it’s ready.

Although they started out making strict Napoletana pies, Pizaro’s began serving New York and Detroit style pizzas once their Monrose location opened. This expanded the menu, which in turn brought me back again and again. I wanted to try every different type of pizza they had to offer. A sausage and mushroom Napoletana pizza was just as incredible as their double pepperonied New Yorker.

And the Detroiter is in a class of its own. Thick sliced with a cheddar cheese crust lining the outside edges and a side of extra tomato sauce to layer on to what might be one of the softest pizza’s I’ve ever tried. 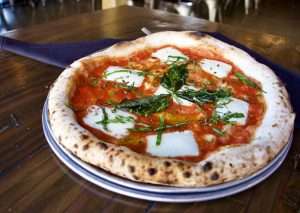 The dough is what makes this pizza so special – soft and deflating at the slightest touch. It’s a blank canvas ready to be painted with a delicate tomato sauce, or not. It might be left white, smothered in the freshest of cheeses and topped with whatever else you desire. That’s the beauty of Pizaro’s. They offer the most traditional of pizzas while providing a wealth of ingredients to mix and match. The dough and the sauce stay the same, but the rest, that’s up to you.

To order online, go to Pizaro’s website and click on the Order Online button at the top right. Enter in your location to find the closest Pizaro’s to you. After selecting which Pizaro’s you will be ordering from, you can peruse the menu and add whatever you would like to your cart. Whenever you are done, proceed to check out and pay. 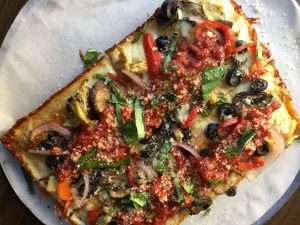 Pizaro’s is the spot for pizza in Houston, and if I were to summarize the pizza at Pizaro’s, I would tell you that it is balanced. Every ingredient happens to individually elevate the others, surrendering to stronger flavors without ever losing themselves in the process. The most powerful of ingredients are brought right back down by the simplicity of the dough and the subtlety of the sauce. And everything is so unbelievably fresh from the mozzarella to the aged prosciutto and even the crimini mushrooms.

I’ve never been disappointed by Pizaro’s. Every time I revisit I fall in love just a little bit more with the precision and focus that is brought to the table. The faces in the kitchen stay the same, and I can always trust that the pizzas do too.