Home » Around Town » Gabriela’s Group Kicking off Weekend of Celebration

Austin City Council issued a decree explaining that October 27 will henceforth be named as “Gabby Got It Day” in Austin, Texas. In celebration of the new proclamation, local businesses-owner and community advocate Gabriela “Gabby” Bucio will host a series of special promotions at each of her Gabriela’s Group establishments across Austin beginning today through Monday, October 31, which not only coincides with Halloween but also Gabriela’s birthday.

Each of the Taquero Mucho and Gabriela’s restaurant locations, as well as Seareinas will offer discount priced margaritas special throughout the weekend, while Revival Coffee will offer customers specialty Gabby Got It-themed cookies and lattes.

Under the DJ alias Gabby Got It, Gabriela will also be stepping in at guest performer on Thursday night at Mala Vida to commemorate the special honor bestowed from the City of Austin, while also performing on Saturday night prior to Mariah Angeliq’s headline set at Mala Santa. Plus, she will help headline this week’s edition of “La Cruda” on Monday which also offers free tacos for patrons alongside performances from Austin’s hottest Latin DJs including Ulovei, DJ La Moon, Zetroc, Danny Ritmo, DJ Spicy and All Day Ray, among others. 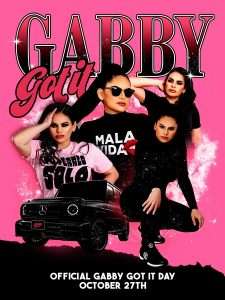 The following day, to celebrate Gabriela’s Bucio birthday as well as the annual Halloween festivities, Gabriela and her team will host a special holiday-themed bash for guests 21+ up on Monday night at Mala Vida. Costumes encouraged although more details will soon to be announced via instagram at @malavidaustin.