The crawfish boil. A southern staple that brings people together to indulge on a bountiful feast while making everlasting memories in the process. The Keep Austin Weird Twist N’ Snap Crawfish Boil was one for the books as there was no better place to enjoy crawfish than at the Fiesta Gardens on the shores of Lady Bird Lake, accompanied by live music and amazing Austinites.

As soon as I walked in, the unmistakable sound of the twist n’ snap was heard all around. Everywhere you looked people were dining on crawfish that were seasoned to perfection, and of course you can’t forget the succulent corn and potatoes that sopped up all flavor, spice and everything nice that goes into making a delicious crawfish boil.

There’s something about the subtle spice of a good crawfish boil that lingers on your lips, urging you to pick up one more every time your hands are empty. I simply couldn’t deny that feeling as with every shell I tossed another was immediately in my hands. I started off with four pounds of crawfish, an amount that usually gives me a challenge but with how tasty they were I finished them with ease.

Crawfish don’t contain a whole lot of meat but part of what makes them so good is the work you have to put in in order to get to the bounty beneath the shell. A task everyone in attendance was ready to take on as piles of empty shells were seen all around.

There is nothing better to accompany a crawfish boil than good music, but when it’s live it makes it all the better. The first band I saw was The Watters, who rocked the stage and set a vibe that was perfect for the outing. Next up was the fifth generation Austinite Calder Allen, an up and comer in the Austin music scene who took the stage with a powerful presence, gracing everyone in attendance with an amazing performance. Following Allen was Black Joe Lewis and The Honeybears, an Austin based band that has been around since 2007. Their experience certainly showed as it seemed everyone in attendance took a break from the crawfish to rock with the music. 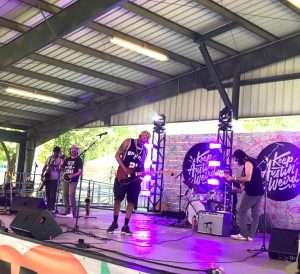 The People & The Competition

Eating crawfish is not a solo affair, it is made best when there are wonderful people around you to take part in a communal cuisine. I had just that as every person I spoke with was incredibly friendly and grateful to be a part of such a fun event.

But with a crawfish boil there is always competition to see who can eat the most, and who can do it the fastest. In the middle of the event staff cleared the stage and set the playing field as 12 people sat down to see who could finish four pounds of crawfish the fastest and win the prize of even more crawfish. In less than ten minutes the contest was over as the winner tossed away his last shell and raised his hands in victory.

The Twist N’ Snap Crawfish Boil was a great experience as every part of the day was full of fun in the sun, creating an atmosphere that was perfect for dining on delicious mud bugs. Every summer Keep Austin Weird hosts this event and I’m already looking forward to next year as I’ve never been a part of a crawfish boil quite like this one.