East Austin’s newest brewery, Koko’s Bavarian, is the perfect location for your local brew and patio outings. Named after brewery partner Konstantin Prinz von Bayern, the Prince of Bavaria. Yes, we mean the actual Prince. Koko’s offers beer, brats, and a family & dog-friendly ambiance for all to enjoy.

Jesse Herman, the brains behind KoKo’s, is no stranger to the Austin food scene. Inspired by a brewery in his Brooklyn neighborhood, Herman sought to create a space in Austin that fostered community and good food. Herman is the parent behind the popular La Condesa, Sway, and the Austin Food & Wine Festival.

We love finding great patios when the weather is nice in Austin, and Koko’s is a must on your list. The outside space is filled with plenty of tables, perfect for meeting with a few friends or a larger group. Stay until dark and wait for all of the string lights to twinkle above your head. Wanting to take a seat inside? Koko’s also offers indoor seating, complete with more string lights for the perfect atmosphere. The outdoor stage is just waiting for the weather to warm up so live music can be enjoyed on the patio. 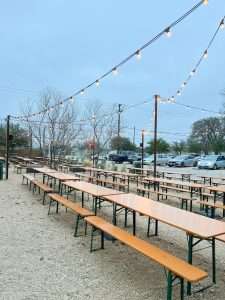 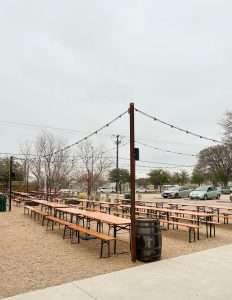 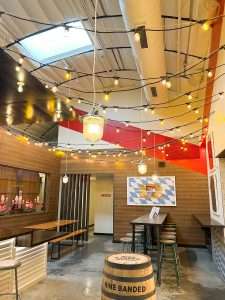 The Brains Behind The Brew

What looks like a room full of stainless steel is a combination of passion and science. Female head brewster, Katie Lowe, turned her passion for home brewing into a career. When we visited Koko’s, Lowe gave us a behind-the-scenes tour of her office, and we were captivated by her devotion to brewing.

The brewing process starts in Texas, with grain sourced outside Fort Collins. From the moment Lowe gets her hands on those grains, the process is meticulously monitored by Lowe to ensure each batch is brewing to perfection. 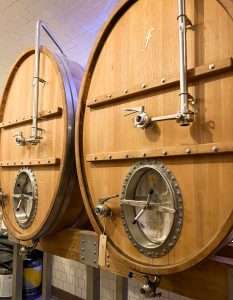 Lowe commented on how inclusive, and supportive the Austin brewing community is during our tour. They strive for community, not competition, and are always willing to lend a hand to their local brewery neighbors.

It’s always a fine day for fine beers at Koko’s. The bar menu is complete with 25 beers on tap, a schnapps cocktail menu, wine, and canned and bottled beers. 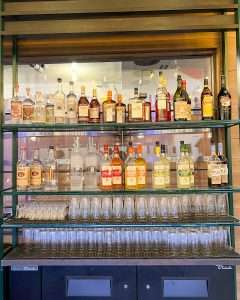 Koko’s features eight brewed in-house beers, with plans to add more in the near future. The Haus Dunkel is one of Lowe’s favorites and the beer Koko uses to cook in dishes. 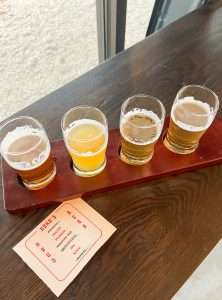 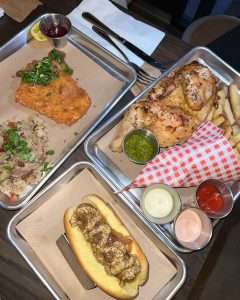 A glance at the sausage menu, and you may notice some meats you typically don’t see every day. There is much to explore, from the classic beer-braised brat to antelope, to rabbit-rattlesnake. All brats are served on fresh potato buns. A fully vegan bratwurst is also available with a vegan bun. If you’re looking for a larger meal or something to share, the roasted organic half-chicken is an excellent option. 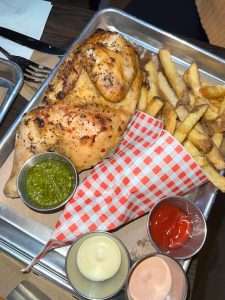 What makes the pretzels at Koko’s different? They’re deep-fried, just like any good Texan would. For another Texas twist, the pretzels come with queso, which is a combination you didn’t know you needed. The house-cut Belgian fries are crispy on the outside and soft on the inside. If you’re a fan of dipping sauces, the fries come with three different ones to try. 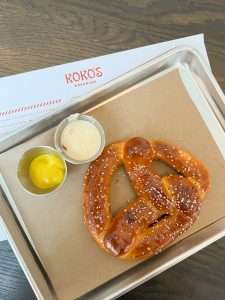 If you still have room for dessert, we recommend the red velvet ice cream sandwich. Creamy vanilla ice cream, sandwiched between two pieces of red velvet cake and topped with cream cheese frosting. Everyone will be fighting for the last bite. 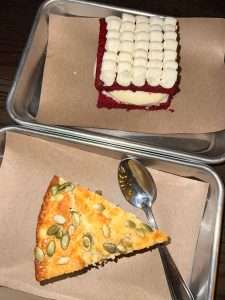 Keep It At KOKO’S

Koko’s Bavarian is a must-visit in Austin. The staff is welcoming and attentive, and the brews are something you don’t want to miss. Stay for some unique German fares, and enjoy your time out on the patio. Join Koko’s for happy hour Monday-Friday from 3-6 PM and enjoy $1 off Haus Beers. Follow them @kokosbavarian or visit their website.