The 2022 NBA Playoffs are just two weeks away. Only the top eight teams from each conference advance to the playoffs, but this year the 7-10 seeded teams will compete in a play-in tournament to secure the last two playoff spots.

The NBA brought back the play-in tournament after great reception among fans in the 2020-21 season. The 9th and 10th ranked teams have the opportunity to secure a playoff spot in two win-or-go-home games. It looks like the play-in tournament is here to stay for three reasons: higher TV ratings, increased fan engagement, and a reduced number of tanking teams.

The play-in tournament will take place April 12-15. Here is a breakdown of the play-in structure: 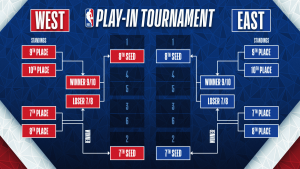 The NBA Playoffs will begin on Saturday, April 16. Here’s what to expect:

The Phoenix Suns picked up exactly where they left off last year after coming up short in the 2021 NBA Finals. Led by MVP candidate Devin Booker, the Suns have already clinched playoff spot as well as the league’s best record, which means they will have home court advantage throughout the 2022 playoffs. The reigning Western Conference champs are looking to silence their critics and prove last season’s Finals run was no fluke. 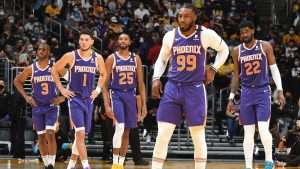 They have been nothing short of dominant this year and are currently on pace to end the season with an 8-game lead over the next best team. Only 10 teams have accomplished this feat and the last team to do it was the 2000 Los Angeles Lakers led by Kobe Bryant and Shaquille O’Neal.

To add more perspective, 9 of those 10 teams went on to win the NBA Championship. The Suns will be looking to join this exclusive list of dominant ball clubs.

The emergence of superstar point guard Ja Morant has catapulted the Memphis Grizzlies into the playoffs. In just his third year, Ja Morant has solidified himself as a franchise player capable of leading a team. Their rise to the two seed in the West is perhaps the biggest surprise this season. Coming into the season, many sportsbooks set the Grizzlies win total at 41 games. They eclipsed that total just a week after the All-Star Break and currently sit at 54 wins.

The Grizzlies’ biggest obstacle to overcome in the playoffs is their lack of experience. With an average age of 24, the Grizzlies are the second youngest team in the league. The added pressure of the postseason will certainly be a new challenge for the young core in Memphis. 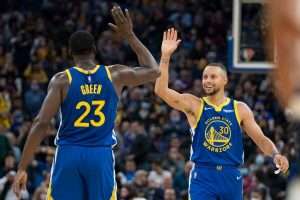 The Golden State Warriors started the season strong with an 18-2 record. Steph Curry became the all-time leader in 3-pointers made and was the early runaway favorite for the MVP award. Klay Thompson returned to the lineup for the first time since tearing his ACL in 2019. The Warriors “Big 3” of Curry, Thompson, and Draymond Green played together for the first time in over 1,000 days. It looked like they were finally back to being the full strength team that won three championships in the last six years.

However, the Warriors began to slow down after the All-Star break. Curry went into a shooting slump and fell out of the MVP conversation. A back injury sidelined Green for over two months. Luckily, stellar play from Jordan Poole in his third season helped the Warriors stay afloat. With a week left in the regular season, Curry is out with a foot injury, but looking to be back come playoff time. The Warriors postseason success relies heavily on their Big 3 being on the court.

It might sound crazy but the Los Angeles Lakers are still a team to look out for despite their woes this season. The Lakers came into the season as the odds-on favorite to come out of the West. After adding former MVP Russell Westbrook to a team with LeBron James and Anthony Davis, it looked like the Lakers had assembled one of the greatest trios in NBA history. Now, they are looking like one of the biggest disappointments. 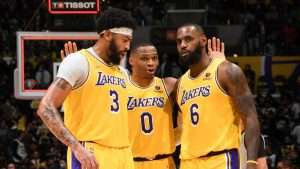 Anthony Davis cannot stay healthy, Russell Westbrook hasn’t lived up to his hype, and a 37-year-old LeBron James has been asked to carry too much weight. LeBron’s greatness is likely this team’s only hope of making a playoff run. He currently leads the league in points per game with 30.1 and has led his team to the Finals in 9 of the last 11 seasons.

The Milwaukee Bucks, led by Giannis Antetokounmpo, are looking to become back-to-back champions. The reigning champs clinched a playoff spot with their win over the Brooklyn Nets this past week. Giannis, a 2-time MVP and Defensive Player of the Year, is having another MVP caliber season. At age 27, Giannis secured a spot on the NBA’s 75th anniversary team. He has become one of the game’s most decorated players in less than a decade. The Bucks’ Big 3 of Giannis, Jrue Holiday and Khris Middleton make them a force to be reckoned with coming out of the East. Like the Suns, the Bucks are also looking to prove their Finals run last season was no fluke. 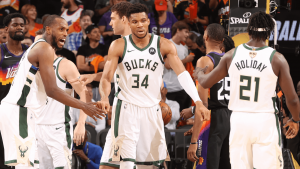 Many NBA fans believed the Bucks had an easy path to the Finals last year. They played a mediocre Miami Heat team, an injury-riddled Brooklyn Nets team, and an Atlanta Hawks team that was missing star player Trae Young for two games. However, Giannis was nothing short of unstoppable in the playoffs, averaging 30 points, 12 rebounds and 5 assists on 57% from the field. If Giannis continues this kind of dominance, the Bucks are in a good position to repeat.

The Philadelphia 76ers started the season with some drama. All-Star guard Ben Simmons asked for a trade and refused to report to training camp. The Sixers fined Simmons for missing games and team activities. Joel Embiid, a top three MVP candidate, had to carry his team in the absence of Simmons. It quickly became evident that Simmons had no intention of playing for the Sixers again. Luckily for them, there was a superstar in Brooklyn who was also looking for a change of scenery. The Sixers traded Simmons to the Nets for former MVP James Harden. After the blockbuster trade, the Sixers were slated as serious contenders to win it all. 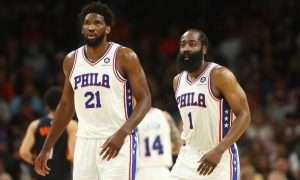 However, with just a week left in the regular season, the Sixers are sputtering to the finish line. Harden has looked out of sorts and they have lost three straight games. Embiid’s consistency has been drowned out by his supporting cast’s poor performances. There are some serious team chemistry issues the Sixers must address before the playoffs get started.

The Boston Celtics have made one of the greatest in-season turnarounds in NBA history. They started the season 18-21, prompting many media outlets to question if the Celtics should split up their two best players, Jayson Tatum and Jaylen Brown. Since then, they went 29-7 to move into first place in the East. The Celtics’ stellar defensive play has turned their season around. They rank first in defensive rating and point differential. 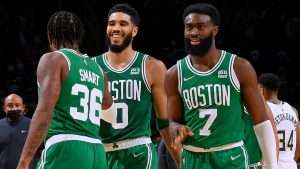 Unfortunately, the Celtics starting center Robert Williams III was recently ruled out for at least 4-6 weeks with a torn meniscus. In his fourth season, Williams solidified himself as a defensive anchor for the Celtics. Losing Williams is a huge blow, but the Celtics have proven they can beat elite competition, posting a 15-1 record against playoff teams in the last month.

The Brooklyn Nets’ season has been somewhat similar to the Lakers. Like the Lakers, they were the preseason favorite to come out of their conference. However, the Nets have severely underperformed and currently sit at the 8th seed. It has been a season filled with drama. Kyrie Irving’s decision to not get vaccinated before the season essentially made him a part-time player because New York City had a vaccine mandate for athletes. James Harden grew frustrated with the team’s poor play and demanded a trade to Philadelphia. Kevin Durant was an early favorite for the MVP award before being sidelined with a knee injury. The Nets could not catch a break. 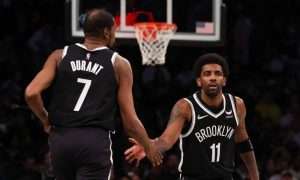 However, the Nets received some good news when New York City Mayor Eric Adams lifted the private sector vaccine mandate, allowing unvaccinated professional athletes to play in local venues. This meant Irving was finally able to play in home games. Durant and Irving have already solidified themselves as top-tier playoff performers. If they can get through the play-in tournament, the Nets pose a serious threat to make a run.

The NBA playoffs feature the best basketball players in the world playing in the most important games of their lives. It is certainly must-see TV for basketball fans. Tune in April 12th to catch all the action.