Home » Culture » Red Bull BC One Takes Over Austin

Red Bull BC One Takes Over Austin

What Is Red Bull BC One

The most prestigious, global breaking competition, Red Bull BC One, continued its 2022 US competition in Austin on Sunday, August 7. As one of five regional stops, the Red Bull BC One Cypher South brought together some of the most elite breakers in the country to celebrate the Texas break scene and deliver unforgettable battle moments. We had never gone to a break competition before and it did not disappoint! 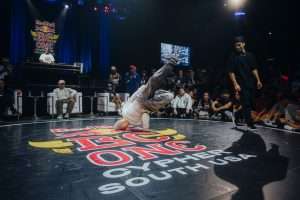 Red Bull BC One is the biggest and most prestigious one-on-one breaking competition in the world. Every year, thousands of breakers compete for a chance to represent at the World Final. With 18 World Finals hosted in major cities around the world since 2004, Red Bull BC One has over 60 events and programs in over 30 markets every year.

The 2022 Red Bull BC One cypher season celebrates the art and athleticism of breaking, those who have pioneered the sport, and the communities who shape what it looks like today. As the global breaking community continues training and preparing for the 2024 Summer Paris Games, where breaking will make its athletic debut, Red Bull BC One is your one-stop resource on all things break including athletes to watch, key events, milestones, and more.

Born and raised in Salt Lake City, Francisco ‘Ali’ Acuna Flores is a 35-year-old breaker who has been practicing for over 20 years. Ali’s passion for hip-hop spans beyond dance with interests in music and drawing. This is his first-ever Red Bull BC One win. 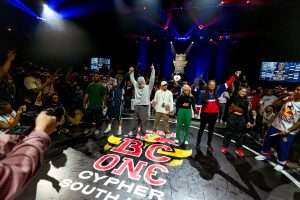 On winning the cypher, Ali shares, “It’s a blessing to be able to do this. Win or lose. Los Angeles, I’m going to be sure to represent and do the same thing I did today.”

“It’s like a dream, except this time, I’m awake. I always wanted to win,” Monse shares, “I’m going to keep training hard and prepare myself for the Red Bull BC One National Finals.”

The competition was judged by world renowned b-boys and Red Bull BC One All Stars, RoxRite and Lilou, as well as Houston-native B-Girl BabyGirl, founder of B-Girl City, one of the first-ever formalized collectives of female breakers in the US. 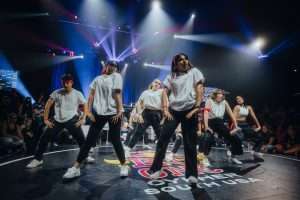 For its 19th edition, the Red Bull BC One World Final returns to New York City, the birthplace of hip-hop, to celebrate breaking heritage and crown this year’s world champions. On Saturday, November 12, 2022, breakers from across the world will reunite for this important moment in the art form’s trajectory to battle it out at the world’s most highly anticipated one-on-one breaking competition.