Lorde’s third studio album, Solar Power, is finally here. Released on August 20th, 2021, this album has been long awaited by fans of New Zealand born artist since the release of her previous album, Melodrama, which came out in 2017. For a look into the 12 track album’s singles, prevalent themes, sound, and a brief comparison to her other projects, keep reading!

The title track “Solar Power,” released on June 11th, 2021, was the first of three singles to precede the highly anticipated project. The song is a cheerful anthem that embraces summertime. The track also shows us Lorde welcoming personal changes along with the season. She expresses gratitude that darker times are behind her, leaving her to enjoy the present moment.

The next single, released on July 22nd, is “Stoned at the Nail Salon”—a more somber song compared to its forerunner. We hear Lorde reminiscing on a fast paced life, and acknowledging the smaller pleasures in her current, simpler lifestyle. The song speaks to the questioning of life choices. It gives advice for how to “make it good,” which could be directed toward herself or the listener.

Finally, “Mood Ring,” released on August 17th, is a lighthearted, satirical track that embraces indulgence in the modern, sometimes commodified means of spiritual practice during trying times, her examples ranging from simple meditation to using crystals and burning sage.

Melodious guitars,  dreamy harmonies, and gentle bass and drums are used consistently throughout this album, delivering mainly mixes of indie-folk and psychedelic pop. Songs like “California” and “Oceanic Feeling” maintain a steady, gentle sound that place the vocals at the forefront. They are complemented by melodic guitar and drums that don’t overpower. Tracks such as “Solar Power” and “Secret’s from a Girl (Who’s Seen it All)” are brighter. They employ upbeat guitars, smooth bass, and percussion.

Popular artists Clairo and Phoebe Bridgers provide vocals on multiple songs including the title track. Their voices add to the graceful harmonies and background vocals. Slow-paced guitar melodies radiate in the song “The Man with the Axe”. This gives it a melancholy sound, along with other calm tracks.

Overall, the sound of this album, while having some songs that feature more casual, drawn back instrumentals, is very cohesive in its harmonious, soft indie and pop elements.

The introduction to the album, “The Path,” delivers an explanation for where Lorde has been, and where she is now. It sets the tone for the project with lyrics like “you need someone to take your pain for you? Well, that’s not me.” A frequent theme throughout this album is a sense of freedom from Lorde. Whether it’s coming from letting go of the past in tracks like “Solar Power,” or accepting the uncertainty of the future in “Fallen Fruit,” which ruminates on the current state of our earth’s climate.

In “Fallen Fruit,”, she also depicts unity through lines such as “we will walk together, psychedelic garlands in our hair,”. This theme of unity is also apparent in “Mood Ring”. In the song, she and her friends search for something to improve their mood. “Leader of a New Regime,” is the shortest song on the album. It has a run time of just 1 minute and 33 seconds. It lies in the same vein as “Fallen Fruit,” portraying an existence when our environment is no longer habitable. Songs like these tackle more topical thoughts and experiences, while others dive into intimate, personal stories.

Lorde often takes inventory of various elements of her life. Distant memories, relationships that have come and gone in songs like “Dominoes,” and the passage of time as she awaits the uncertain future. Because of this, similar themes carry throughout the album even though each track contains a different narrative. For instance, “Big Star” is a sickly sweet love song for her dog that will make you want to hold your pets tight and never let them go. “California” is a farewell to an old California lifestyle. She describes glamorous memories made in the state, as well as things she won’t miss about it.

While this album differs in story from one song to the next, it’s cohesive in its displays of self-improvement and gratitude that arise when you relinquish your hold on the past. Though the overarching themes of the album are slightly broad, yet some are clear. Freedom and becoming united with yourself and others are evident messages. She notes her appreciation of loved ones, her surroundings, and herself. She also shares her decision to free herself from the past in order to cherish the current moment.

While singing about her personal experiences with change and the current cultural moment, Lorde also reforms her sound. In Solar Power, Lorde has pulled back from her electropop roots for an acoustic, mellow indie style, which compliments the more mature sentiments expressed throughout the album. 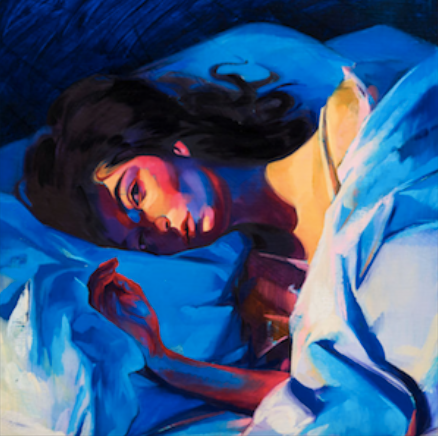 Lorde was just 16 years old when she released her debut album, Pure Heroine, which was rich with lustrous electropop tracks about teenage angst, party anecdotes, and the dread of getting older with popular songs like “Royals” and “Ribs.” In Melodrama, a 20 year old Lorde chronicles the stresses of love, heartbreak, and the ups and downs of young adulthood. The largest difference between Lorde’s first two albums and this one is the genres it fits into. This change could be due to the lyrics, but it also shows her growth as an artist as she evolves.

Lorde shifts from the topics of adolescent nerves and young adult heartbreak to more recent experiences, which could appeal to an age range older than teens and young adults, but does not exclude them. It’s reflective, timely, well-rounded, and it still holds true to Lorde’s poetic writing, but with a new sound. Solar Power balances both upbeat and softer tracks, and is a perfect album to end the summer season.

No matter how you interpret the elements of this album, we think it is worth the listen for long-time Lorde fans, and first time listeners alike! You can stream “Solar Power” on Spotify and Apple Music, as well as through Lorde’s official web store. If you want to see more music reviews and other trending topics, check out our Culture Column here!