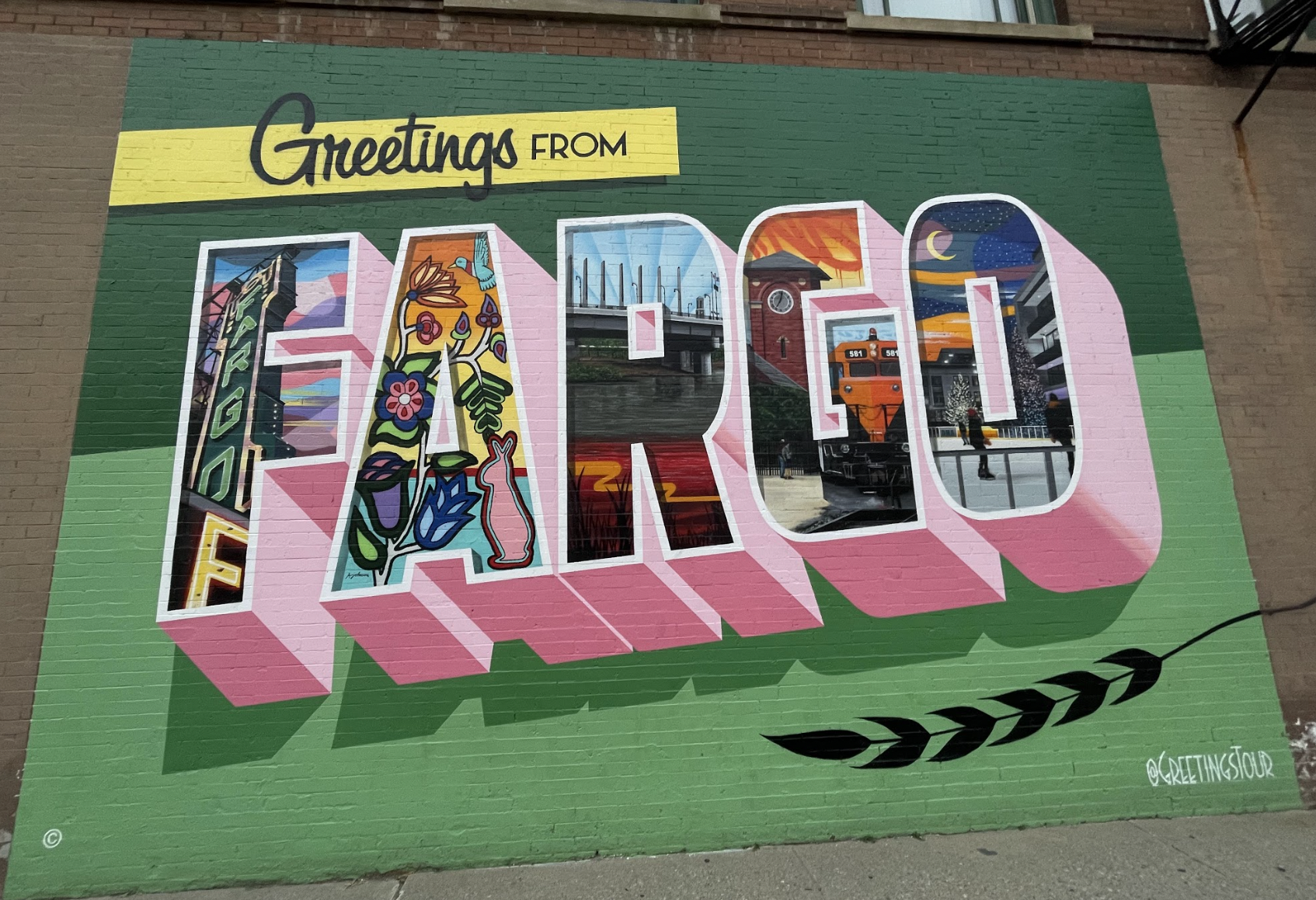 I’ll never forget my first trip to the Midwest.

Fargo, North Dakota is located just off the Red River and its sister city, Moorhead, Minnesota, is just a few minutes drive across the bridge. The area is flat which makes for great sunsets I’d come to see. 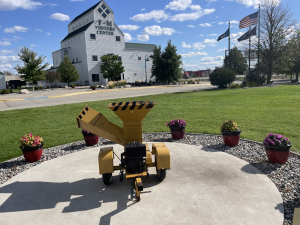 Looking at Fargo on its face, there wasn’t much going on. The sidewalks were barely used and there weren’t groups of people waiting to cross the street. However, once you make it downtown, it’s a whole different story. My favorite parts of the trip happened in the small, very unique shops littered along Main Street. I popped into family-owned boutiques and Scandinavian souvenir stores but the coolest of them all was O’Day Cache. I could’ve spent hours in the shop as there were so many little trinkets and specially-made furniture pieces, traditional Indian scarves, and the coolest glassware I’ve ever seen. 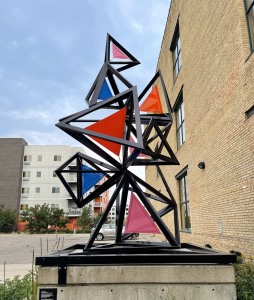 The downtown area is popular on the city’s adventure passport, too. Besides the shops, the Plains Art Museum is a local hotspot around the area. And if you think you’ve heard about Fargo before, you’re probably thinking of the show and movie. Speaking of, the infamous Woodchipper is on display at the visitor’s center which is also a stop on the pass. It’s not a hard building to miss as there’s a rainbow-painted Bison sitting out front.

There was always a flurry of activity in Broadway Square, whether it be live music or children spinning around in what seemed to be giant spin top toys. On Saturdays, the square would be filled with food trucks, fresh produce vendors, and small business owners participating in the Red River Market. The bomb dog from Top Dog Hot Dog was arguably the best meal of the whole trip. I wish I could tell you what was on it, but even the sign said to trust the creator. 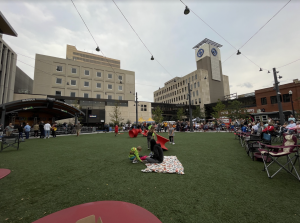 It was a party that everyone RSVP’d to, showed up to, and brought more than their allotted plus ones.

The food revolved around experimental pizzas and beefy burgers. At Cowboy Jack’s, their classic cheeseburger lived up to one you could find in the greatest of burger stops in Texas. I was surprised, but it was exactly what I needed. Every bar was welcoming and not packed to the brim– something we don’t see often in Austin anymore. Each place has something different and unique to offer, whether it be from the vibes or the beers. The city offers a crafts and drafts pass that allows you to check out all the local breweries and redeem offers, as well as a prize at the end of your journey. I checked out a few of the stops on the list and have found that I’ve become quite the brewery connoisseur.

I immediately knew this colorful brewery would be one of my favorites when I heard Photo ID by Remi Wolf playing as I walked up. With a very youthful feel to it, Wild Terra had the greatest coffee shop meets alcoholic hangout ambiance. Their upstairs seating was full of greenery and cool chairs (I’m a sucker for a good chair), not to mention they served “experimental” ciders. The tastes were light and didn’t pack a punch, but they were refreshing and went down easy. Some of their flavors, like pear and the cherry-lime sour, are ciders you won’t find anywhere else. 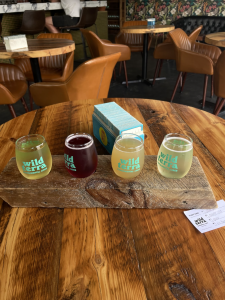 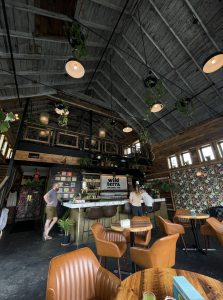 This brewing company was located inside The Historic Union and had a rather small selection of brews. However, they made up for it with the large amount of classic arcade games lining the walls. And for a bonus, you receive 5 free plays when you come in with your crafts and drafts pass.

What I got: The Mango Cart 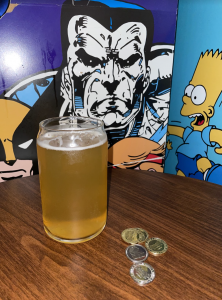 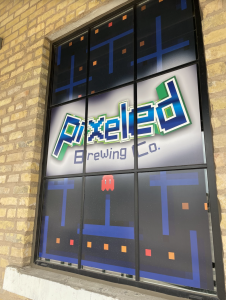 JL Beers has four locations you can visit so there’s really no reason why you wouldn’t stop in for a sip. I went to the downtown bar and was welcomed in by the kindest of bartenders– something I truly value. When I arrived, the scene was quite an interesting one. In the outdoor seating, there were two little old women gossiping and drinking their beers with a side of a good-looking burger. I was hitting myself for eating before this stop. Once inside, the regulars sat at the single bar seating and a young man read a book at the end of the counter.

A beer I wish I would’ve tried: Wilderness Tuxedo P.O.G 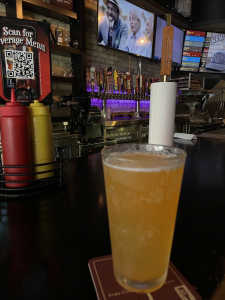 A little off the train tracks of downtown, you’ll find another main street that houses a few local, iconic stops: Rhombus Guys and Front Street Taproom. The inside of the bar was dimly-lit and cozy with chandeliers the size of a bear hanging from the ceiling. It wasn’t too busy, but the rush began right when the clock hit 5 p.m. Some people came in for one drink while others sat for a while with friends. I felt the history of Fargo in this bar and loved all the little details that went into making this place a good hangout. You could also order from the local pizza place just a few doors down and have it delivered to you at the bar for free.

What I heard others order: Mexican Honey Light and Fargo’s own Dad’s Session IPA

What I had: Raspberry Hibiscus Cider… was delicious 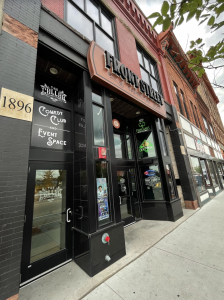 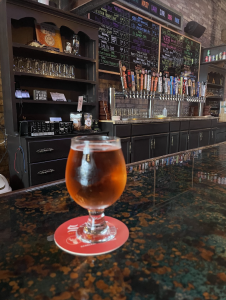 Junkyard was a nice break from the stuffiness of bars that comes with the spilling of beers. The brewery was busy with families and young friends playing Yahtzee under a deck full of colorful flowers. It was an oasis in an area that looked almost deserted. There was art all over the walls and good music to accompany the happiness that just exudes from this place. At this point, I realized each brewery was like its own little world inside an even weirder world that is Fargo. The bar was also dog-friendly, so I made a friend named Titus, who looked more like a horse than a dog. 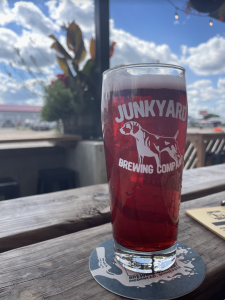 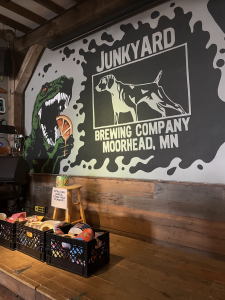 I don’t like to pick favorites, but if I had to it would be Swing Barrel. The bartenders the evening I came in was two women who made my last day a nice end to the trip. Even after the Longhorns lost to Bama, my spirits remained high while Janika poured me a free drink for my sorrows. I had a few drinks at this bar but I promise you this didn’t contribute to my ranking of favorite! I had two flavored seltzers and the way they make them is criminally genius. With over 6 flavors to choose from, syrups posted by the beers are added to a base seltzer that can have flavors mixed and matched for a great time. I also tried their popcorn made in-house with the aid of one of their popular brews, Sugarfoot Jr.. The vanilla oatmeal stout tastes very similar to a good cold brew, and tastes even better when it’s coating popcorn. 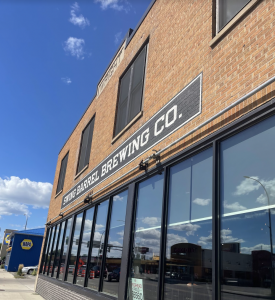 I entered a new world when I stepped foot in Fargo. I learned a lot from the locals, and especially from the Lyft and Uber drivers. Lori shared the story of a Viking ship built by a Minnesota artist (that you can see with the adventure pass at the Hjemkomst Center) who passed before he got to fulfill his promise of taking it to water. But, don’t worry, his family saw his ambitions through. Jean-Eddy encouraged me to spin a globe and plant your finger: that’s where you’ll be going next. And Kenben told me the best hangover cure is drinking a whole jar of pickle juice.

There’s nothing really like it, and I hope everyone gets to experience the odd charm at least once in a lifetime.

We had an amazing trip to #Fargo and loved the food, culture, and things to do there. Had a great time checking out stops in the adventure and crafts & drafts passport 🍻 #northofnormal