The Southern Smoke Festival, an annual Houston event hosted by Chris Shepherd’s nonprofit raised $1.62 million for restaurant workers. After taking a brief hiatus for COVID, the event came back stronger than ever and for the first time was a multi-day event.

In September 2018, Houston-area food and beverage worker Danny Caplinger was seriously injured in a motorcycle accident. After multiple surgeries and through staggering treatments, his mother Laura was forced to choose: Pay a six-figure amount that she didn’t have to get Danny into life-saving rehabilitation, or put Danny in hospice. She had two days. Her son’s life was in the balance. Just then, a friend told her about Southern Smoke Foundation. 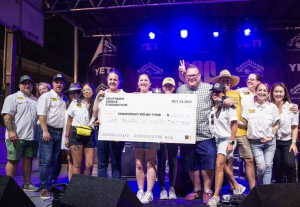 Executive Director Kathryn Lott called Laura. After quickly developing a case, the Foundation awarded her $100,000 to pay for Danny’s rehab, getting him in just in time. He pulled through. And along the way, we’ve stayed in close touch with Laura and Danny. We’ve watched him improve. We’ve been smiling beside him.

Danny was at Friday’s H-Town Welcome Wagon and Sunday’s East Downtown Throwdown, where he stood up from his wheelchair and fired up a pie with Bianco.

We cover a lot of Austin food events and have consistently said they are some of the best we have ever visited, but his weekend felt like a pivotal moment for the Houston food community. Key word being community. Houston’s food scenes has been exploding for years, but it always felt like the close knit community aspect had some work to do – what we saw this past weekend was exactly that. 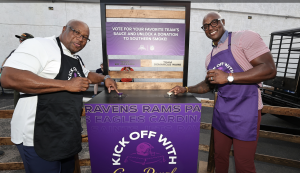 Foodies, musicians, restauranteurs, and the community all came together for a great cause the cemented what it means to be from the space city. When an event has Chis Shepherd, BunB, Shaky Graves, Bo Jackson, and Demarcus Ware you know something is going right. We can’t wait to be back next year and be sure to lookout for our IG Reel recap of a weekend we will remember!