One of the top food events in Austin every year, Hot Luck Fest hosts chefs from around the country to prepare classic dishes and original favorites that take the crowd by storm. At three different locations on three consecutive days the Hot Luck Fest put on an event that people’s taste buds won’t soon forget. Founded by Mike Thelin, James Moody, and Austin’s own local celebrity Aaron Franklin, the Hot Luck Fest was once again a hit!

The first event of the week was the Giddy Up at Mohawk Austin. Walking in the first thing I saw was a wood fired pizza oven run by James Beard Award winner Chris Bianco. One of the best bites of the whole event, Bianco was pumping out delicious slices of sausage and jalapeno pizza using only the best ingredients from Texas.

Incredible pizza pies weren’t the only thing shocking attendees as Elias Cairo from Olympia Provisions came all the way from Portland, Oregon to showcase his classic take on charcuterie. A first generation Greek-American, Cairo is a Salumist who learned the art of charcuterie from his father and treated guests to a platter of cured meats that left you wanting more. 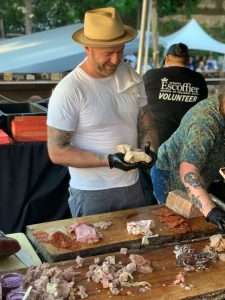 The Giddy Up was an amazing start to the Hot Luck Fest that was capped off by DJ Jazzy Jeff turning the tables and turning up the crowd for the next event.

Day 2 – The Hi, How Are You Hootenanny

The second event of the week was the Hi, How Are You Hootenanny at Franklin Barbecue. Showcasing chefs from vastly different cultures everywhere you looked there was a different cuisine to try.

One of the crowd favorites were the lobster rolls from James Beard Awarding-winning modern oyster bar Eventide Oyster Co. Owned by Arlin Smith and Chef Andrew Taylor the two brought the bounty of New England to Austin, providing the crowd with more than their fill of delicious lobster rolls.

A line that seemed to never get shorter was that of Patrick Feges and Erin Smith’s Feges BBQ, who served a mini beef cheek taco that was like nothing I’ve had before. Established in 2018 Feges BBQ has taken the barbecue scene by storm using traditional methods paired with modern interpretations to create dishes that leave you in awe.

Atop my favorite dishes of the week was from Tyson Cole and Vaidas Imsha’s Uchiba, who prepared a Japanese Sea Bream dish that was as delicious as it was beautiful. 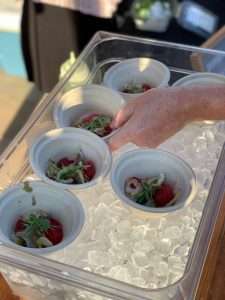 The third and final event of the week was Al Fuego, held at the Wild Onion Ranch where the masters of flame came together to make cooking with fire the focal point. With over 40 chefs in attendance it was a welcomed challenge to try every plate there was to offer.

One of the hardest kinds of seafood to perfect, Alon Shaya’s Saba prepared a scallop dish atop whipped goat cheese that almost melted in my mouth. Based in New Orleans, Saba is no stranger to making incredible seafood and it was no wonder that people waited half an hour to try their spectacular scallop dish. 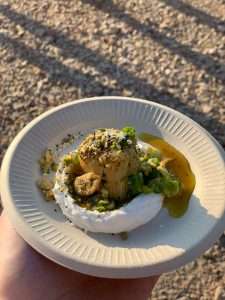 A bite that has haunted me ever since was the marinated top sirloin from Earl Ninsom’s Eem. There’s nothing better than a good piece of meat grilled to perfection, as the top sirloin was fall apart tender and wonderfully marinated bursting with flavor and leaving me longing for more. 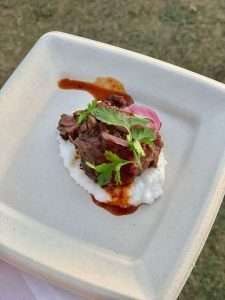 From the surf to the turf chefs prepared dishes that were infused by the flavor of flame. A seasoning that is sometimes lost, but this event showed will never be forgotten.

While I was only able to describe a handful of the plates available at this year’s Hot Luck Fest, the event showcased a plethora of chefs that displayed their culinary expertise to the max. I was lucky and incredibly grateful to get the chance to attend this amazing event and if you ever get the opportunity don’t hesitate as it will be one you will never forget.