When I walked into Teal House Coffee and Bakery, I didn’t know anything about it but what I’d heard: everything was fantastic, but I HAD to try the cinnamon rolls. As a coffee connoisseur and lover of baked goods (super quirky, right?) I could not have been more psyched to see if this home-run bakery turned SoCo sensation lived up to the hype. Spoiler: it did.

In 2016, the Phillips family noticed a neighbor’s success in selling paella out of her home. In their very own teal house, the Phillips had ample baking skills and five kids dying to go to Disney World, so they embarked upon an entrepreneurial undertaking of their own. What began as selling cinnamon rolls (we’ll get to those later) and apple pies out of their home expanded to become a full menu and so many devotees that they require two locations. And, if you didn’t connect the dots, the Teal House name pays homage to where it all began. 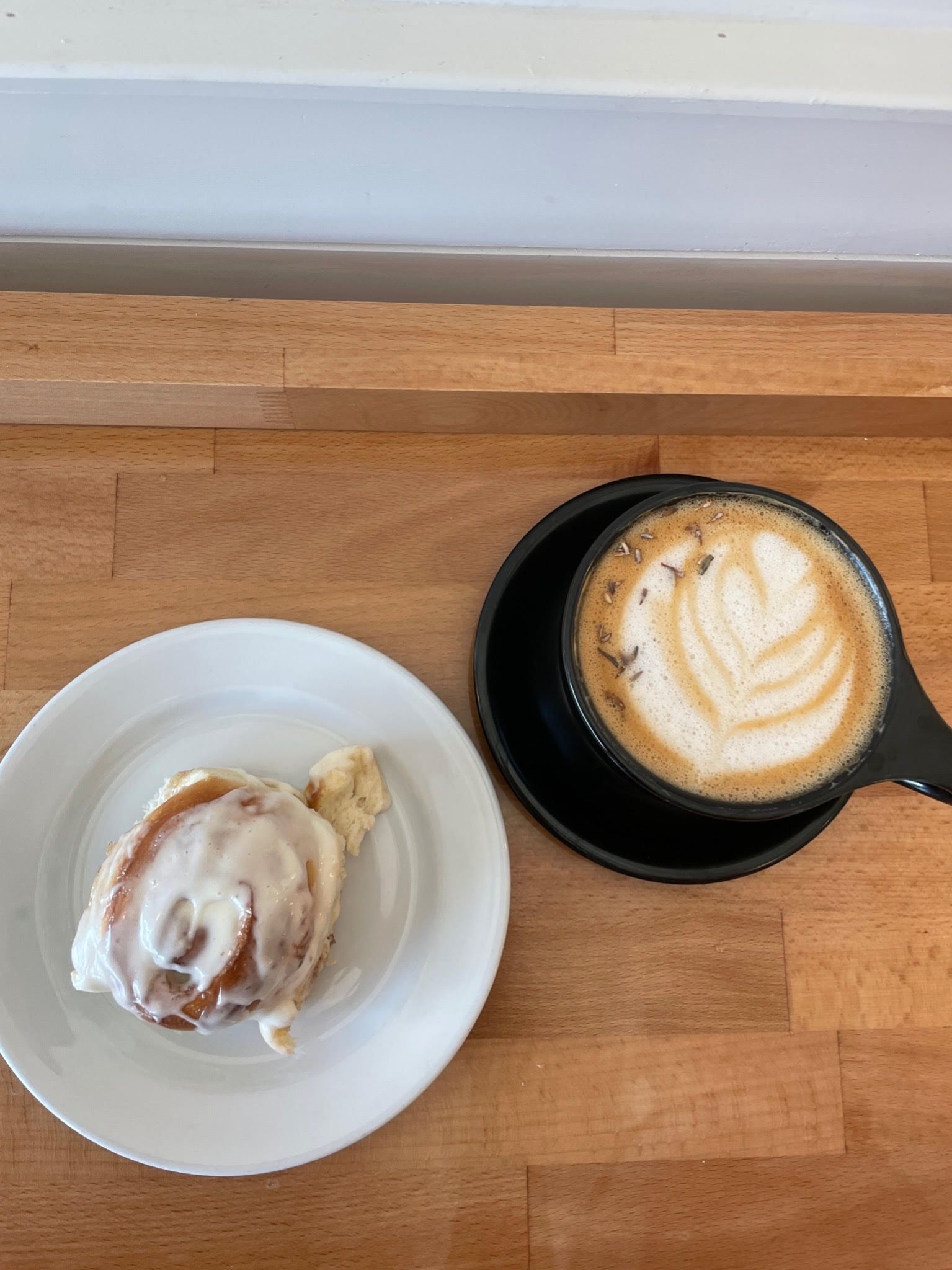 For my first time trying Teal House, I got to go to their new SoCo storefront. The first thing that struck me when I walked in was that teal-tiled counter. Against the white walls, light wood, and minimalist look of the rest of the coffee shop, those tiles seriously pop, and all together it creates a bright, cheery feel. I also loved that, through a doorless opening on the far wall, you can see some of the work going on in the kitchen. With the variety offered in their menu and customers always ready for more, I doubt they stop baking from open until close. Don’t let the clean, minimalist aesthetic of this place fool you; their treats are elaborate and teeming with flavor–and if you attack them with the vigor I did (nearly unavoidable), you’ll be needing some napkins.

Okay, so some might say I cheated by ordering an iced chai, which isn’t technically a coffee. But I’m a certified chai addict, so I couldn’t leave without trying theirs–and it’s my professional opinion that this is the best I’ve found in Austin thus far. Perfectly sweet, light, and cinnamon-y, it was refreshing with just the right amount of spice to get me thinking about autumn. Luckily for me, I was able to bring a friend who had the presence of mind to ask to try their signature drink. It’s called the Princess Diana, and it did not disappoint. I’m nineteen years old, okay? I’ve tried plenty of coffees in my time. And NEVER IN MY LIFE have my tastebuds been so pleasantly confused. The Princess Diana involves both lavender and coffee and almost seemed to change from one sip to the next as my brain tried to process the presence of herbal notes in something that wasn’t tea. What it was, definitively, was fantastic.

Now, the moment we’ve all been waiting for: Teal House’s famous Cinnamon Roll. Some might say that being consistently rated the best cinnamon roll in Austin is a lot of pressure to put on a pastry; those people clearly haven’t tried it. There’s the exterior layer, just crispy enough to keep it all from falling apart, the dense, chewy, and insanely cinnamon-y middle, and just when you think it can’t get any better, the soft core practically melts in your mouth. But even with all of that going for it, I still think the pièce de résistance is the icing. I was definitely caught off guard by the saltiness (balances the whole thing out perfectly, by the way), and though I have a few guesses at some ingredients, no one would divulge the secret recipe.

Next was the Croissant Breakfast Sammy with egg and avocado. The croissant itself was perfectly flaky (Also, look at it! So gorgeous), and the sandwich came with the surprising kick of pepper embedded in the egg. Finally, I got to try the Andy. Named for owner Lance Phillips’ wife, Andrea, this massive croissant/cinnamon roll fusion is flaky and soft with a similar icing to the cinnamon roll and caramelized cinnamon sprinkled on top. It’s tangy, sweet, and buttery all ROLLED (get it?) up into one, and evoked the feeling of riding a flavor rollercoaster.