The Rocky Horror Picture Show is a cult classic. You’ve either seen it and loved it, or seen it and maybe found yourself so confused you didn’t know what to think. Either way, ZACH Theater is bringing you this classic live on stage for all to enjoy. Get ready to sing, dance, scream, and throw things toward the stage. We’re bringing you your guide to attending the show for first-time or long-term lovers. 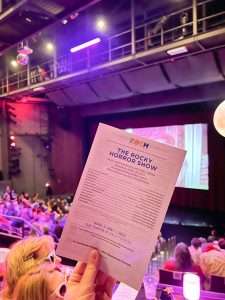 There are not many shows that can claim to be a musical comedy horror film, but in 1975, The Rocky Horror Picture Show hit the theaters. The movie is based on the 1973 musical stage production of the show. Upon premiering the show, the initial critics were extremely negative, but show runners noticed people who loved the show continued going to viewings again and again. Soon, Rocky Horror became a hit as a midnight movie. Audiences attended the show dressed as their favorite character and began interacting with the film.

If you’ve been to a rocky horror production, you are familiar with the audience interaction with the film. In the early days of the midnight movie, the audience started adding in their own bits of dialogue, and soon enough, the entire film was filled with one-liners for the audience to shout at the screen. A shadow cast is also present at the film, and they mirror the actions of the film in front of the screen.

Today, Rocky Horror is the longest-running theatrical release in film history. Followers of the show are loyal and the production is always a sight to see.

ZACH Theatre’s rendition of The Rocky Horror Picture Show is chilling, thrilling, and fulfilling. Get ready to do the time warp again (and again) during this interactive show. Unlike other Rocky Horror productions, ZACH Theater is solely a musical based on the film. While the movie does not play behind the cast, the production is excellent quality, the music is loud, and the audience/cast relationship is alive and well.

Cecil Washington Jr. as Dr. Frank-N-furter and the entire cast capture your attention with their whit and delivery. As part of the show, the cast adds in the audience participation lines over a microphone, but if you know a line or two, feel free to shout it out. If you have a participation bag, get your props ready to use. Of course, there is dancing for those willing to participate during the Time Warp. If you’ve never been to a Rocky Horror Production, just know this is not your typical silent theater.

The show runs for two hours, with a 20 minute intermission after the first hour of the show. Many audience members will be spotted wearing their favorite Rocky Horror merchandise or even dressed as cast members. Drinks and food are available at the concession stands, and it is recommended to arrive 10 minutes before show time to get settled.

Rocky Horror Picture show is running at Zach Theater now until May 1st. Participation Prop bags are available for purchase so you can fully participate in the show. ZACH Theater recommends the show for anyone 14 years or older for adult content and sexual themes. ZACH Theater requires proof of vaccination OR a printed copy of a negative COVID-19 test result obtained within 72 hours (3 days) of the show date for all patrons ages 12 and older. Purchase your tickets here: zachtheatre.org 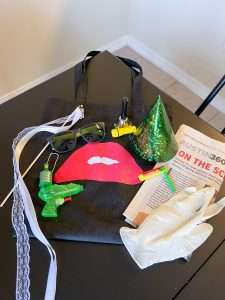