Home » Around Town » Austin » Charlie and the Chocolate Factory The Musical

Charlie and the Chocolate Factory The Musical

If you’re in Austin searching for a fun family night out, a date night away from the kids, or even a night out with the girls, look no further. Roald Dahl’s Charlie and the Chocolate Factory The Musical was truly a blast for all ages. We’ve found ourselves continually talking about the show, still laughing at the jokes, and humming the songs even days later.

The cast is incredible, from Cody Garcia as Willy Wonka, to the young William Goldsman, who played Charlie Buckets at the performance we saw, they truly are a talented bunch. The ensemble truly highlighted their performances, and successfully delivered the single most hilarious Oompa-Loompa interpretation I have ever seen (I mean it y’all, you’ll laugh until you cry).

The entire show truly had us laughing out loud. With incredible physical comedy, modern pop culture references, and even some jokes just for an Austin, Texas audience, we left with smiles on our faces, having laughed so hard. The show truly exuded joy, and genuinely had aspects that every member of the family can enjoy. 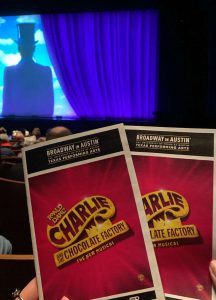 What you need to know

Bass Concert Hall’s cafe on the third floor is the perfect place to pick up any candy or snacks you may want during the performance. After all, it’s nearly impossible not to get hungry watching Willy Wonka dance through his world of candy. There are also bars scattered throughout the venue, serving specialty, themed drinks as well as the basics. We ordered the “I Want it Now!,” which is non-alcoholic and a perfect sweet treat for making the kids feel special. They also serve “The Bad Egg,” a tequila mixed drink that also looks tasty. 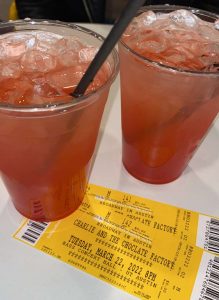 We arrived one hour prior to the show, and had no trouble parking. We parked in San Jacinto Garage near DKR Stadium for $15, and were able to walk right across the street to the venue. Parking was card only, so keep that in mind if you’re paying to park.

Roald Dahl’s Charlie and the Chocolate Factory runs now through Sunday, March 27, 2022 at Bass Concert Hall. They still have great seats available for the remainder of the performances, which you can find at the Bass Concert Hall box office, all Texas Box Office Outlets, by phone at (512) 477-6060 or online at BroadwayinAustin.com.

We genuinely had such a fun night out attending Charlie and the Chocolate Factory. It was nice to dress up, get a good laugh, and sit down to a show that makes you feel like a little kid again. Whether you’re fans of the 1971 original film, can’t get enough of Johnny Depp’s, now iconic, 2005 portrayal, or are completely unfamiliar, this adaptation of Roald Dahl’s classic story is one that will keep you smiling long after the curtain has closed. 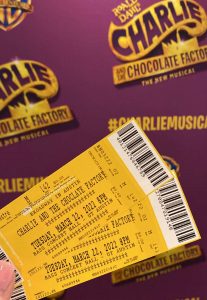